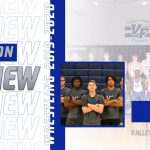 Wrestling team looks to rebuild Last season the wrestling team sent three wrestlers to the district tournament at Canton McKinley. Unfortunately, all three were seniors and will not be returning. In all, the team lost seven wrestlers to graduation and one to an injury. This year only two starters, junior Danny Lehman (113) and senior-captain